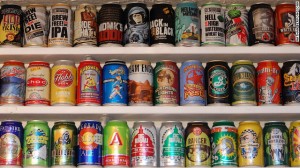 The can apocalypse is upon us! Not sure if you’ve noticed, but there’s a crazy number of craft breweries canning their beer these days. For eons (a young persons word for “decades”) the beer can has been the iconic mark of the mass-produced American pale lager. With the rise of the craft beer renaissance, it was only a matter of time before the little guys would take a crack at alternative packaging opportunities.

It started in the tumultuous days of 2002. We were quickly coming to grips with what a “post-9/11 world” actually meant. The US invaded Afghanistan on live television. Both Osama Bin Laden AND Saddam Hussein were still professional terrorists. When Layne Staley’s extracurricular activities finally caught up to him everyone had a sense that we had hit rock bottom. You probably lamented all over your MySpace (or maybe your Livejournal) page.

But there was a light at the end of the tunnel. A then-tiny brewery in equally-tiny Lyons, Colorado had decided they’d had enough. Cans would no longer be the sole domain of BudMillerCoors. Oskar Blues boldly set out where other craft breweries feared to tread. And the world was never the same again.

Cans are a natural fit for beer. They keep out the harmful UV rays which would otherwise degrade its precious cargo. They’re cheaper, they’re recyclable, and you can take them to the beach. Modern technology has even allowed us to make cans that do not impart any kind of off flavors to the beer though some drinkers still disagree.

To test this principle in a completely non-rigorous and un-scientific manner, I drank two Sierra Nevada Pale Ales—one from the bottle, and one from the can. 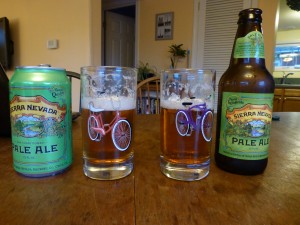 Interestingly enough, the beer from the can smells, well, “tinnier” than the beer from the bottle. I was concerned my mind was playing tricks on me and allowing my eyes to do the tasting, so I conscripted an unprepared second opinion. I simply asked her to smell the two beers and tell me what they smell like. She identified the can-poured beer as smelling “tinny” and the bottle-poured beer as “more floral”. In an effort to see if she just guessed what I wanted to hear, I took the samples away, mixed them up, and gave them back to her. She identified the same can-poured beer as the tinny one, but only slightly more so than the bottle-poured one.

Unfortunately, my quick and dirty experiment really only confirms one thing: Sierra Nevada Pale Ale doesn’t smell all that appetizing. As for the discrepancy in aroma between the two, that could be caused by any number of variables. I don’t know how old these beers are nor how they’ve been stored and so comparing one to the other is not exactly fair to the canning procedure as a whole. For what it’s worth, the beers tasted nearly identical.