For the past forty years the refrain from the craft brewing industry has been a shouted and defiant chorus of “Us vs. Them”. Assuming the traditional underdog role and running with it as long as it will hold, the “little guys” (yes, even you Mr. Adams) have effectively sold beer by demonizing the bastardized version of bohemian lager made globally  famous. As the elevator pitch goes, big, industrial breweries make bland and inoffensive beer most palatable to the unwashed masses and craft is the shining knight here to offer something new, something different, something authentic.

It’s a story that’s done its job well, but as with all good stories it shades out some of the nuances that would otherwise complicate a good yarn. As a shift brewer I am just as interested in how things get done as I am about any particular flavor profile or recipe execution. Contrary to popular belief, I do not spend my days dreaming up new recipes and exciting flavor combos (if only!) Instead I try to finish the day’s tasks in the safest way possible, at the highest level of quality I can muster, and as efficiently as I can manage (in that order).

to that end, I was super stoked to have a chance to tour the Anheuser-Busch InBev SA/NV facility in Merrimack as part of the winter session meeting of the New England chapter of the MBAA. I’ve only been a member of the MBAA for about six months now, but it sounds like ABI-Merrimack has been significantly involved for a while now and I applaud them for embracing a community that at times seems openly antagonistic to them.

Despite being the baby of the Bud plants (at a scant 2.8 million BBL/year), this place is still enormous. Our first stop was the new “craft” wing where they ferment the various acquired brands. They procured six 1200 BBL cylindroconical fermenters solely for this purpose. Apparently all of their other fermenters are horizontal cylinders which are not exactly amenable to things like dry hopping. So this is all uncharted territory for the Merrimack crew. Our tour guide was himself rather new to this section of the cellar and got lost a couple of times trying to show us stuff. 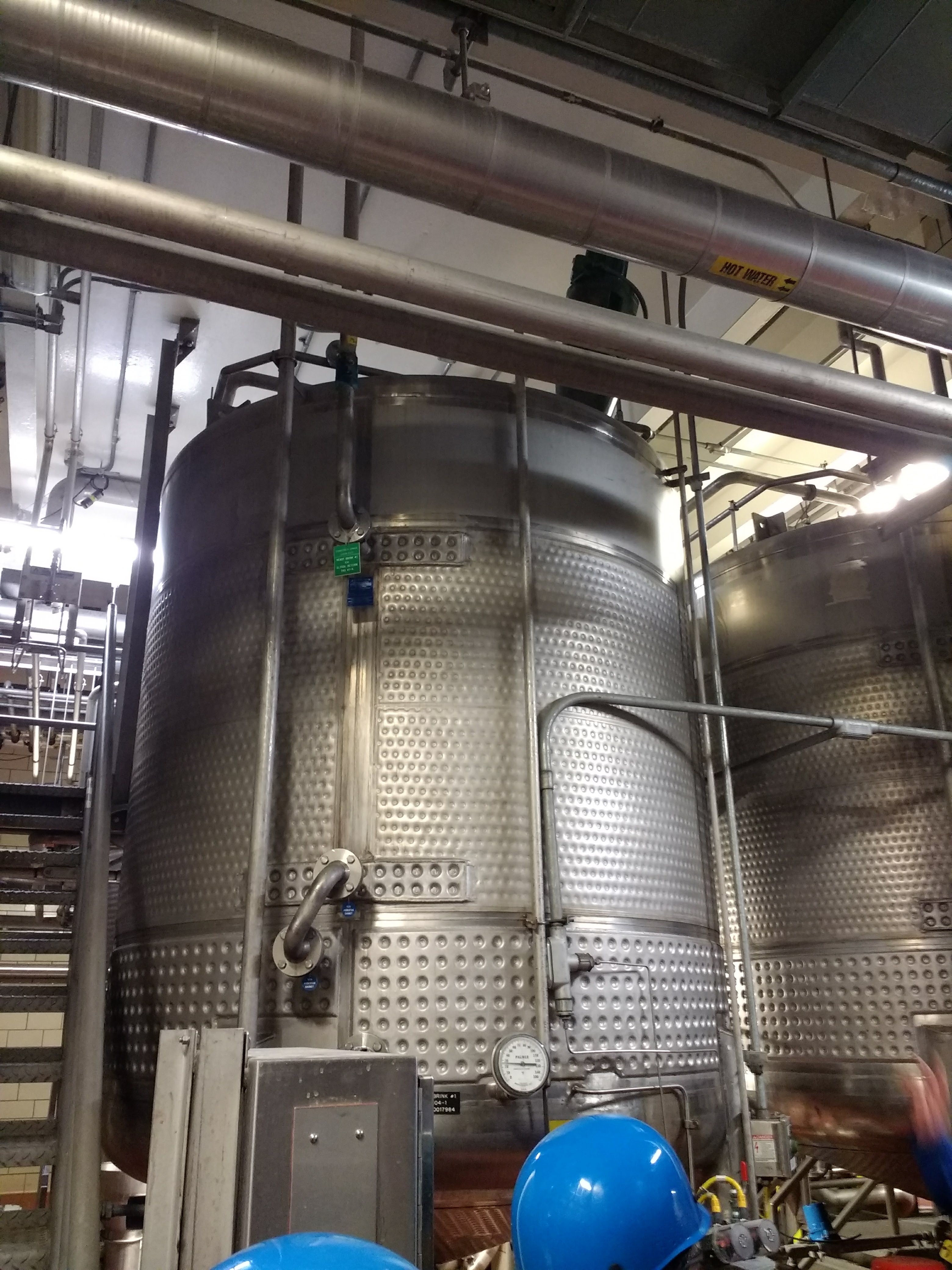 At one point we stumbled into a room with several of these tanks and I finally started to see something vaguely recognizable from my day-to-day operations. I thought, “Ah, here must be some kind of pilot system. Just look at these (admittedly oddly non-jacketed) 60 BBL unitanks!” Then I got a closer look. 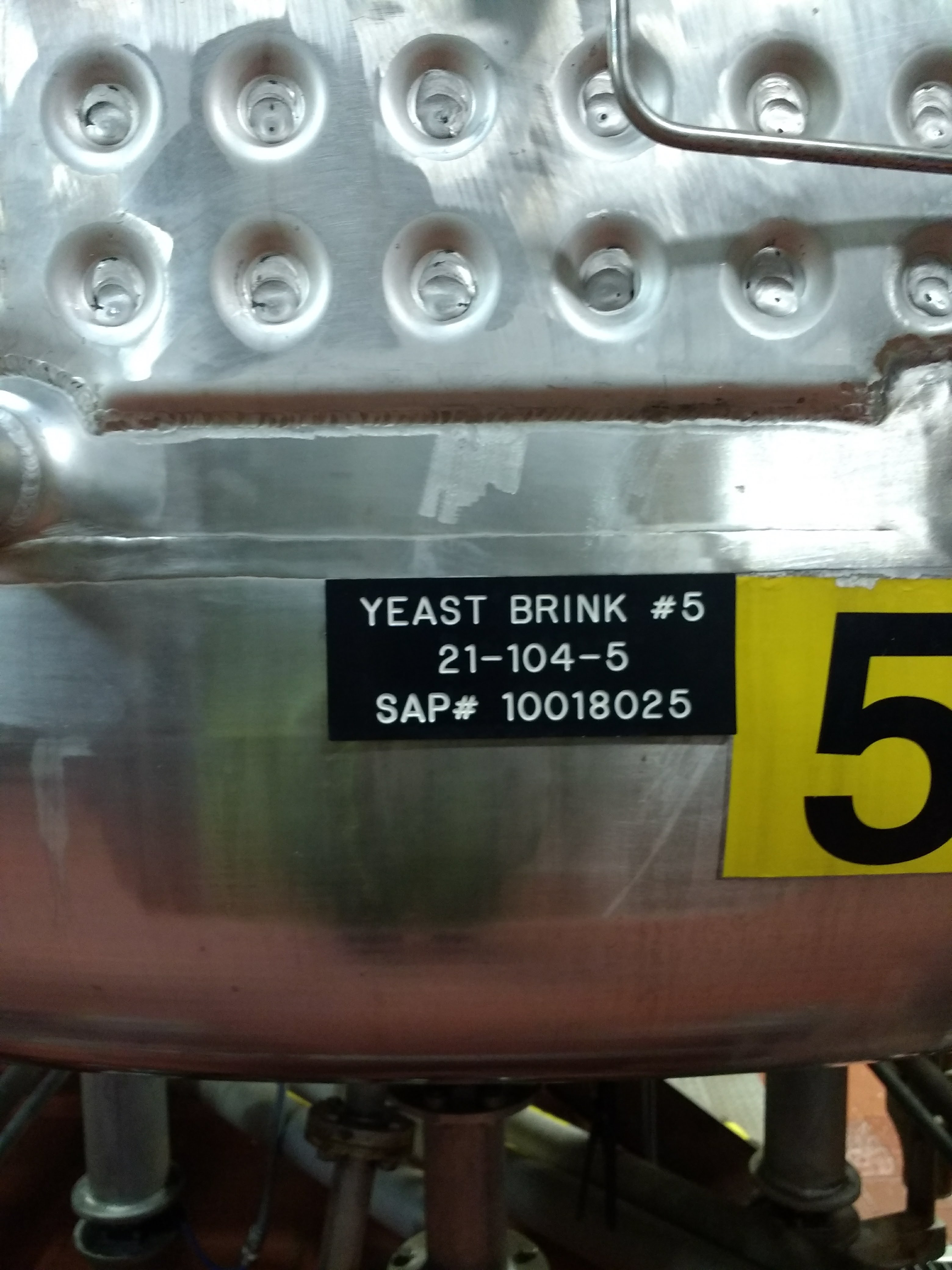 For comparison, a yeast brink at my job is made out of a converted 1/2 BBL keg. From the yeast prop cellar, we meandered our way closer to the start of the process in the brewhouse command center. We passed an entire train depot which I thought strange for a brewery until I realized this was how grain was delivered. Several train cars can be emptied in a day with small fork truck-looking things pushing the cars to and fro. Each car holds enough grain for Rising Tide to brew for two years—or something like two days here at AB.

Here we walked past the heat exchanger, which is kind of just sitting in some random hallway off to the side like some old-timey steam radiator. After the inevitable jokes among brewers about never wanting to take it apart (easily one of the more reviled tasks in craft production) our guide said he’s worked there over 20 years and only seen it taken apart once. Granted, it’s probably pretty clean given that they’re not typically whirpooling with over a pound of hops per barrel.

The final stop of the tour is where the whole brewing process starts. There is a 620 BBL kettle, two mash tuns, and a cooker (presumably for gelatinizing corn). Everything is fully automated and the brewers hang out in a darkened control room with roughly a dozen computer screens monitoring production from dough-in to packaging. Think less Office Space and more Pushing Tin.

The Merrimack plant is a cool place, both from a technical standpoint and because they have a new biergarten replete with Clydesdales. And while it’s easy to peg AB-I SA/NV as a faceless global beverage factory (that name, though!) attempting to be the sole purveyor of mildly alcoholic beverages for the entire planet, it’s just as easy to forget that it’s also composed of typical manufacturing plants employed by regular people who have probably forgotten more about the science and engineering of making beer than I will learn in a lifetime.

On our way out a friend of mine asked if I had tried any of the local products offered during lunch. I told him I had a Budweiser (in an aluminum bottle, no less) and that it tasted as I remembered. He remarked that the Michelob ULTRAs were fresh off the line from the day before. I started to laugh assuming he was just taking the piss but his face remained stone sober. “Say what you want, but that beer was actually one of the best beers I’ve had in a long time.” And this, coming from a man who does beer quality control for a living and has one of the better palates I’ve ever had the pleasure of meeting.

If nothing else, they know what they’re doing.